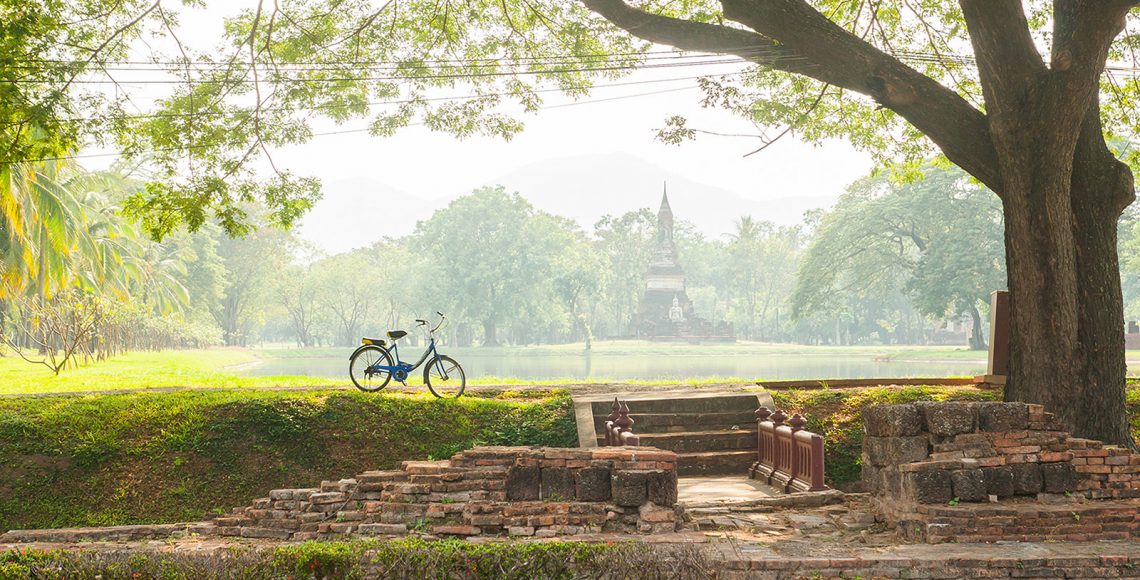 Close your eyes for a moment and listen to the space you are in. Take a moment to breath. You may hear the rhythmic agitation of a washing machine’s spin cycle muffled only slightly by a closed door, the hum of the air conditioning or the neighbor’s dog barking. This mental sonic imagery illustrates the power of sound as a medium for communication. It can relay meaning, emotion, memory, and facts through language, music, and field recordings.

Sound, when understood as an environment, is a soundscape: a powerful tool that helps humans relate to their surroundings. Soundscape is said to help people sleep faster and feel better. American physicist David Gibson even suggests that sounds, those that induce the feeling of peace, tranquility, and relaxation—help the body and mind heal. The exposure to nature sounds enhances the body’s ability to ‘disconnect’ and let go of its natural ways of response, relaxing the central nervous system and allowing you to truly get connected with your inner peace. People that are exposed to nature sounds, and especially those that have high stress levels to begin with, may show a more positive attitude when being confronted with day-to-day problems and difficulties.

Stress often drives people to seek relief through nature, even though we might not understand the biological basis for it. It is our innate desire to seek a safe environment that is behind the feeling of calmness and happiness caused by nature, which allows our bodies and brains to restore and maintain their energy. This is called the stress recovery theory (SRT). Due to this restoring effect, we are also capable of performing better on tasks that require our directed, voluntary attention.

Why is it that we are so driven towards nature? From a genetic standpoint, we are hunter-gatherers from 40,000 years ago-: our biology hasn’t changed much since. We are meant to live in nature, exposed to the sounds of running streams, the wind through tree branches and ocean waves. These positive emotions we connect with nature cause us to seek its presence : taking a walk in the park, bringing plants indoors, preferring a window seat. When people are asked to list their favorite places, natural environments are overrepresented. This concept for our instinctual desire for nature is known as biophilia. While the term is not too well-known, the concept is still very pervasive: people are willing to pay higher prices for real estate closer to lakes, beaches and parks, for high-rise views over cities and forests, or a mountain vista.

We feel what we hear.

In contrast, the feeling of exhaustion that so often hits us at the end of a workday might be the result of an early morning, a string of bad meetings or maybe a lack of caffeine. An equally likely culprit, though, is the barrage of sounds we’re exposed to each day, including ambient noise most people don’t even notice. Those hidden sounds, experts warn, could be having a big impact on your well-being. According to Julian Treasure, founder The Sound Agency, hearing is primal. We don’t have ear lids. There is no way to turn it off. We hear everything around us all day, all the time. When we get stressed out, our immune system suffers.

Replenishing And Restorative Effect Of The Sounds Of Nature

White noise has been called the legacy of sleep sounds as it has lulled people to sleep for ages. White noise encompasses all of the frequencies any person can possibly hear (about 20 Hertz to 20 thousand Hertz), it holds the potential to block out any outside sound. White noise sounds like the static you hear when you accidentally tune cable TV to an unused channel.

However, research explains how nature sounds (pink noise) can physically change our mind and bodily systems, helping us to relax. Researchers at Brighton and Sussex Medical School (BSMS) found that playing ‘natural sounds’ affected the bodily systems that control the flight-or-fright and rest-digest autonomic nervous systems, with associated effects in the resting activity of the brain.

“We are all familiar with the feeling of relaxation and ‘switching-off’ which comes from a walk in the countryside, and now we have evidence from the brain and the body which helps us understand this effect.”

Furthermore, a 2011 study comparing the effects of five different speech-masking sounds (including filtered pink noise) found that the sound of spring water was the most optimal for workplace performance, creative thinking and acoustic comfort.

With the average person now spending 6.5 hours+ a day in front of screens — bombarded by bad news, endless work, and social media strutting — there’s a distinct shift underway: a retreat from visual/digital culture into music and sound. This flight into music is being led by millennials/Gen Z. A recent global Spotify survey of 15- to 37-year-olds found that one of the five defining traits of this young demographic is that they: “use audio as an escape from their screens,” and audio is a “huge part of their everyday lives.”

It’s not just the kids: A recent Sonos global survey showed the many ways all people use music to boost their wellbeing:

Roughly 75% report they listen to music to reduce stress, and that listening to music is key to producing their best work.

Thus, you might want to consider creating ambient soundscapes to turn your home into a sanctuary and refuge, wherein peace, serenity, and calmness thrive.

1. Remove Any Extraneous Noise
These should be positioned away from your space of rest or sound should be absorbed. Then you have to work on the acoustics of the space.

2. Think About The Sound System You’re Going To Put In And How You Route The Sound

3. Think About The Content You’re Putting Through It
That’s where generative soundscapes, appropriate music in retail spaces or biophilic sound masking is important.

Sounds Of Nature In Everyday Life

Now, think of a space in your home that relaxes you. Maybe a bedroom or a relaxation or meditation corner. Try to create the landscape of your comfort place through sound. This will give you a sense of place, and when you have it, you feel safe and peaceful. Music, an ambient soundscape, does more than just make your home feel cozier. It also gives you a feeling of warmth and tranquility. It makes you feel truly at home. You know you’re home when you hear those familiar sounds that soothe you and ultimately, calms you down.