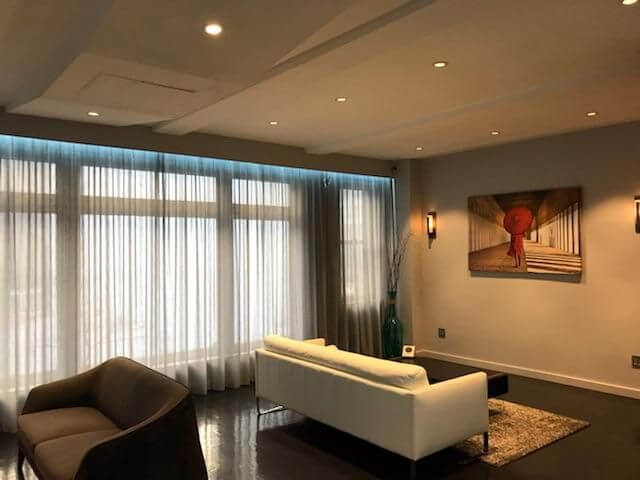 With LED light fixtures becoming the norm on any new construction and gut reno projects, it’s worth understanding what you get with your fixture package. Unlike incandescent light, not all LED fixtures are born equal. There are quite a few considerations when specifying LED fixtures, from the dimming range and technology to variations in color and temperature and even the lifetime of the fixture. Below are seven aspects to consider when specifying LED fixtures for your project or your house.

It’s a common misconception that any LED dimmer can be paired with any dimmable LED light bulb. Unfortunately, that is not the case. All LED fixtures come with a Driver. The driver technology determines whether the LED can be dimmed and how, as there are several dimming technologies on the market. Some examples are Forward Phase, Reverse Phase (also known as Phase Control or Triac), Electronic Low Voltage (ELV), Magnetic Low Voltage (MLV), and 0-10V which requires special wiring.

Most LEDs have multiple driver options, so it’s important to check if the selected dimmer can support the driver that was specified with the LED fixture.

The easiest way to ensure that your light bulbs and dimmer controls are compatible is to check the lamp’s manufacturer spec sheet or dimmer compatibility sheet.

These are the main LED Driver technologies

0-10V Dimmers have been used in commercial applications for fluorescent lighting and occupancy and daylight sensor systems for years and are now becoming popular with LED products. One reason this standard is widely established is that it is defined in the IEC standard number 60929 Annex E, making it acceptable to most engineers

The human eye responds to low light levels by enlarging the pupil, allowing more light to enter the eye. This response results in a difference between measured and perceived light levels.  A lamp that is dimmed to 10% of its maximum measured light output is perceived as being dimmed to only 32%. Likewise, a lamp dimmed to 1% is perceived to be at 10%.

How important is this?

By enlarging the pupil, the human eye responds to low light levels and that allows it to see more light. For example: if the measured light output is 1%, then the perceived light level will be 10%.  For the brightness of the luminaire to be matched to our eyes, the dimming curve has to be configured appropriately. If not, the perceived changes in brightness will be affected.

A good LED driver with the capacity to dim to 0.1% configuration provides the option to set the dimming behavior as per the human eye functionality and application preference. So, if you want a 50% reduction in the light intensity, you need to select the expected dimming response. Therefore, when shopping for LEDs, don’t be fooled: an LED which can dim to a seemingly low 5%, will be perceived by the human eye at more than 20% which is rather bright.

For white LED lights, color consistency can be a critical but often overlooked quality that can make or break a project. Read on to learn how and why color variation exists, and how to ensure you can attain excellent color consistency for your LED light project.

What exactly is color consistency?

In general, color differences can be characterized across two axes – blue/yellow and green/magenta. For example, you may find that one light is “bluer” than the other, or more “green” than the other.

The blue/yellow difference can be characterized using color temperature (in degrees Kelvin). Acceptable color variation depends on the application, but for warm white, +/-75K is typically the threshold of noticeable color difference, and +/-150K for normal white or cool white.

Keep in mind that Duv variation is very much overlooked as a metric but is arguably more noticeable than Correlated Color Temperature (CCT) variation. If color consistency is critical for your application, be sure to ask your supplier for Duv tolerance metrics.

Some sophisticated manufacturers will describe their color consistency using a metric called SDCM or MacAdam ellipses, both of which refer to the same concept and metric. The unit of measure is a “step” and the larger the number of steps, the larger the variation in color.

In general, color consistency is deemed acceptable when it is within a 3-step SDCM range for standard applications, and 2-step SDCM range for more demanding applications for professional or architectural uses. In some cases, even narrower color tolerances are needed, but most people will not be able to tell that there is any color deviation once consistency reaches 1 or 2 SDCM.

SDCM is a superior metric compared to CCT and Duv for two reasons. First, it captures the variation in both the blue/yellow direction and green/magenta direction and distills it into a single number. This can be useful because in some cases the color inconsistency can occur in both dimensions. The second reason is that a 100K color difference is considered larger at lower color temperatures. SDCM algorithmically takes this into account and makes the necessary adjustments depending on the color temperature. The primary disadvantage is that many manufacturers are not sufficiently concerned about color difference and will oftentimes be unfamiliar with this metric.

It’s worth noting that LED fixtures degrade over time and thus the SDCM or MacAdam ellipse, may shift over time. A good quality LED fixture should maintain its SDCM values for the duration of the manufacturer’s advertised fixture lifetime and/or warranty.

Why do LED lights get dimmer over time?

The term degradation in relation to LEDs refers to the decrease in luminous power over the course of the LED’s life.

Degradation is like an aging process in which the LED becomes dimmer and darker over its life cycle as the LED driver generates heat and the heat causes the LED fixture to degrade over time. In the US, LEDs are often given an L70 rating. This rating describes the time it takes for lumen output to drop below 70%. Although other ratings like L50, L80 and L90 can also be used, L70 is the most common as this is when the brightness of the light becomes markedly different. Once the LED lumen output has dropped below 70%, it will still emit light, but it may no longer be fit for purpose. Different environmental conditions such as excess heat in the space where the fixtures are installed, can cause degradation to accelerate. In addition, lumen degradation is not a linear measure. Degradation may start slowly, but then accelerate after it drops below the 70% threshold.

The temperature of light is measured in degrees Kelvin which is what the K at the end of the light temperature value represents. Most LEDs are locked to one color temperature, i.e., 2700K, 3000K etc. When dimming these LEDs the light tends to become grayish, while incandescent or heat based light (like the sun) is cool when bright, i.e., 4000K or higher and warm when dimmed, i.e., 1400-1800K.

In technical terms, color temperature is the temperature of an “ideal black-body radiator that radiates light of comparable hue to that light source.”

Let’s try that in English: imagine an object made of iron. At room temperature, the object would obviously appear black. Heated up to 1500 degrees Kelvin (K) however, it would glow red. At 2700K, it takes on a warm, yellowish glow. At 4200K it appears bright white, and by 5500K it glows blueish. That’s how the color temperature numbers are determined.

Enough of the geek-speak, just remember that the number indicates the general look or feel of a light or the light bulb colors when it’s turned on.

Here’s a color temperature cheat sheet to use when shopping for LED lighting: 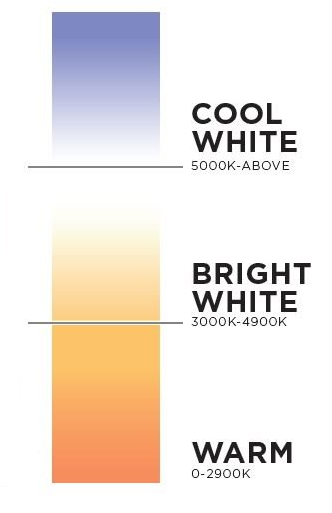