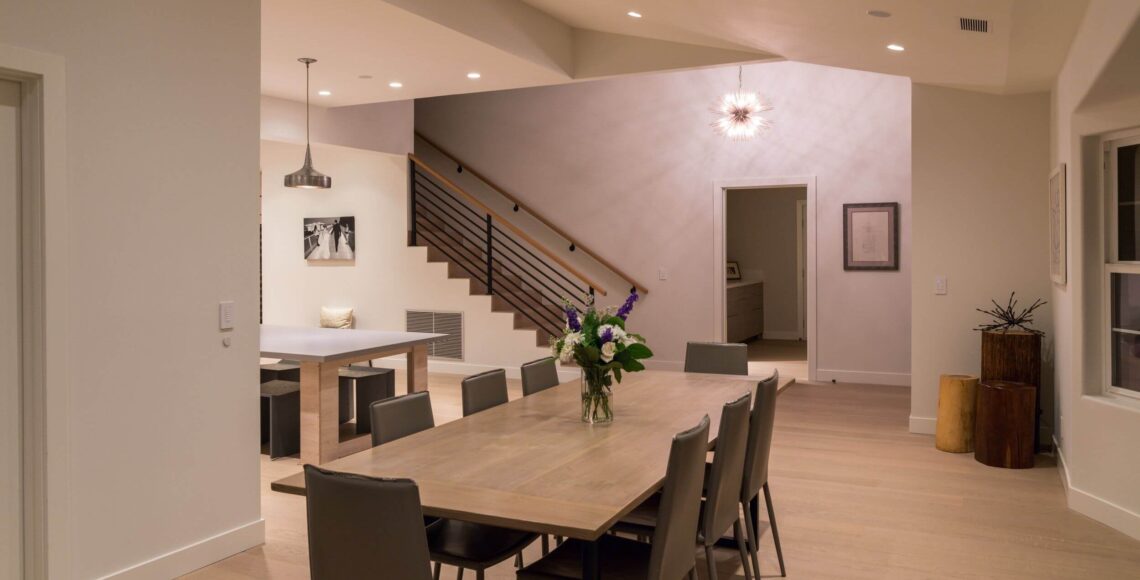 Color consistency is defined using MacAdam Ellipses. A one step MacAdam Ellipse defines an area of a chromaticity diagram where the average person is only able to distinguish a single color. The diagram shows examples of one step ellipses on a chromaticity diagram where only a single color can be distinguished by the average observer. Note that the human eye is more sensitive to wavelength changes in the blue and red spectrums than green, hence the differing size of the ellipse between these colors.

When blending different types of LED applications such as cans, strips/linears, and decoratives in one space it’s hard to keep color and temperature consistent.

In a single production batch of LEDs the majority will typically fall within a five step MacAdam Ellipse with a small proportion falling outside this with greater color variation. If LED manufacturers were to discard LEDs outside of a one step Macadam Ellipse to give perfect color consistency it would mean the majority of LEDs would be wasted making production costs prohibitive. Instead, LEDs are measured on the production lines to determine their color and then batched together into color bins so that luminaire manufacturers can select those most suitable for their products. The wider the color bin that a luminaire manufacturer is willing to accept, the lower their cost becomes as the LED manufacturer is able to sell a greater proportion of the yield from each production run. The lowest cost color selection is typically “Full Yield”, in which the luminaire manufacturer purchases the entire production run of LEDs regardless of variations in color. Although this reduces cost it inevitably results in a color variation between luminaires, and between chips within a single luminaire, that most clients would be unwilling to accept. At the other end of the cost spectrum a luminaire manufacturer can order one step MacAdam Ellipse color bins, however, such a narrow and expensive color selection would be unnecessary in the vast majority of applications.

Developed well over 50 years ago, Color Rendering Index (CRI) measures the ability of a light source to reveal the colors of various objects in comparison to the ideal (daylight) source. In other words, how similar an electronic light source (like an LED luminaire) renders colors compared to natural light.

CRI indexes eight standard colors and how these are represented by a specific light source compared to natural daylight. 100 is the optimal ‘best’ score. The average CRI for modern LED lighting is between 80 – 90, and are considered a “good” color representation, relatively true to nature. However, best in class LEDs will have a CRI of over 90 and will render the colors of the interiors you are designing more effectively.

Why a New Metric?

Well, since around 1974 the method for measuring color rendering has been largely unchanged – unlike the advancement of lighting and technology. With LED lighting so common now, lighting designers and scientists strongly feel CRI is becoming less effective at achieving desired results in the real world. While many lighting professionals will continue to work with CRI, TM-30, developed in 2015 by the Illumination Engineering Society (IES), provides an alternative, more comprehensive color index. 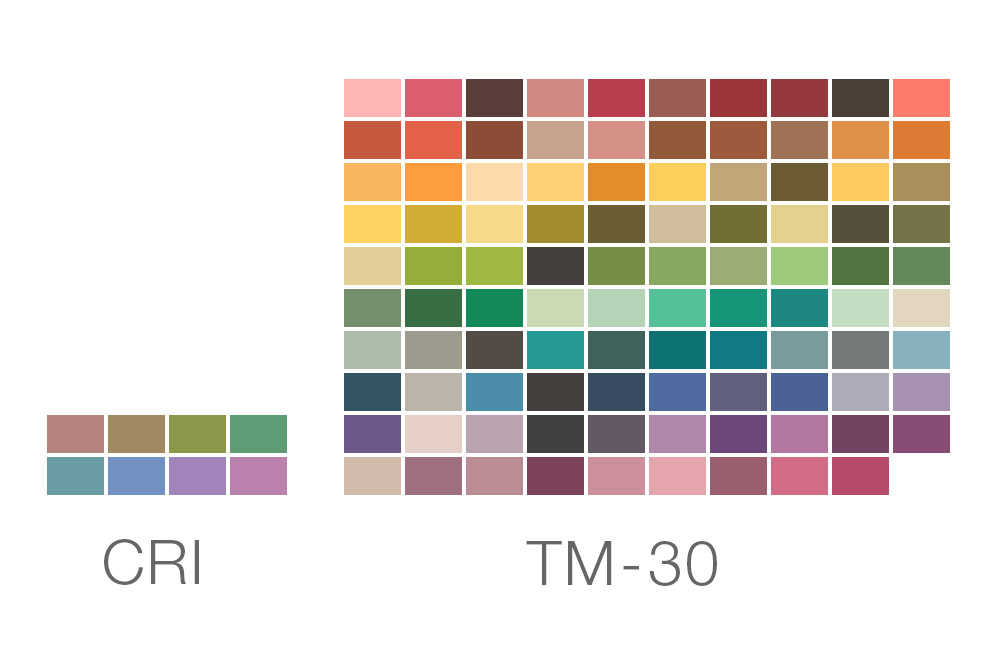 What’s the Difference Between CRI and TM-30?

Color Fidelity: Enumerates the accuracy with which the color appearance of surfaces and objects under a given test source match their appearance under a reference illuminant.

Color Vector Graphic: Provides a visual representation of hue and saturation changes occurring in surfaces and objects when viewed under a given test source relative to when viewed under a reference illuminant. The addition of the Color Vector Graphic provides a wealth of color rendering information beyond averages, showing us at a glance exactly where the hue and saturation shifts are taking place on the color spectrum

What is R9?R9 is the score that represents how accurately a light source will reproduce strong red colors.”Accurate” is defined as similarity to daylight or incandescent bulbs, depending on the color temperature. Just like each of the CRI R value calculations, R9 is determined by calculating the reflected color from a theoretical object with the reflectance profile defined as TCS9. The reflectance spectra is provided below: 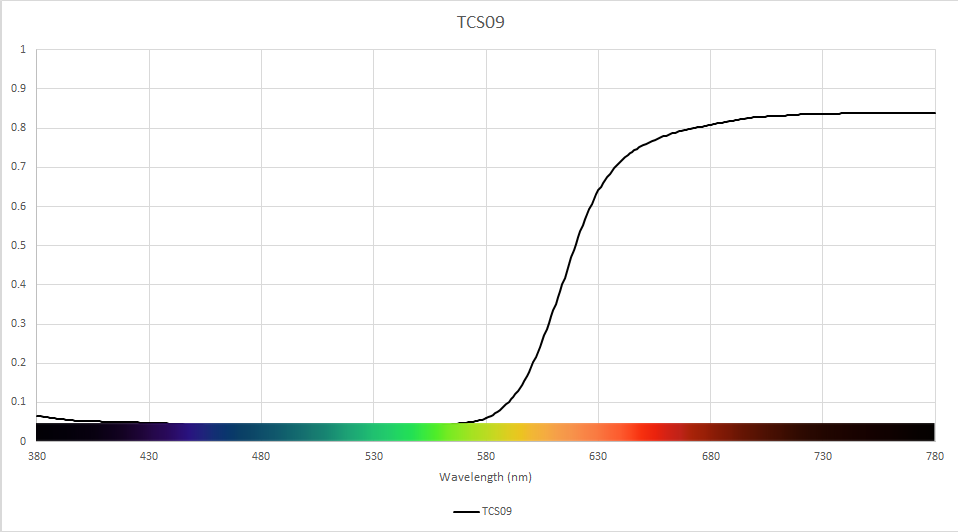 What is notable is that the TCS9 spectrum is almost entirely composed of red light. Spectrum-wise, we see this as wavelengths longer than 600 nm.This means that if there is not enough red light in the light source, it will make red colors appear “off” or different.Below is a typical LED spectrum compared to the reference source (daylight). There is a very notable lack of red light emitted by the LED at wavelengths past 600 nm.As a result, the R9 value for this LED is at -1.4. (That’s right, a negative number!) This is in spite of the fact that the general CRI (Ra) comes in at 79. 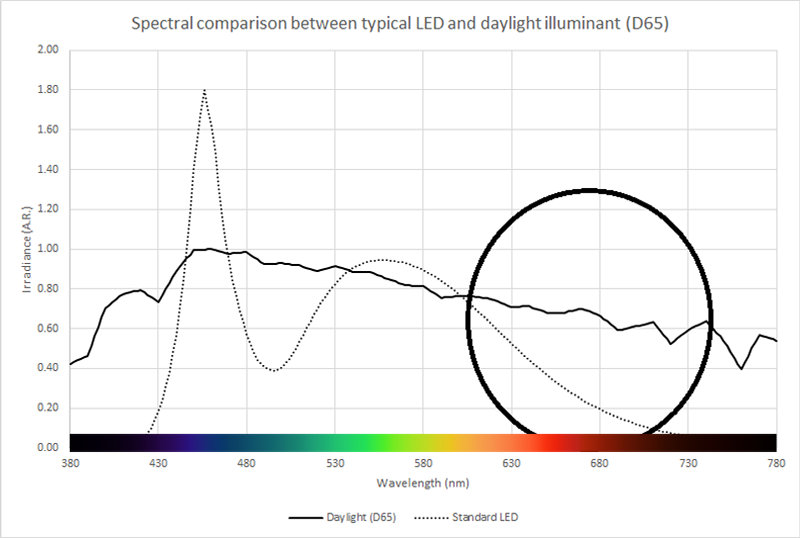 Why is R9 important?

R9 is a very important metric because it represents how well an LED renders the red color and if we base our LED selection purely on CRI values, many light sources might be lacking in red content, but this fact will be hidden due to the averaging out of CRI calculations which do not include R9.As the chart below shows, a light source can actually perform quite well with the first 8 test color samples, scoring quite well for R1-R8. For the general CRI Ra metric, this means that an LED with poor red color rendering can still get by with an 80 CRI (Ra) rating. 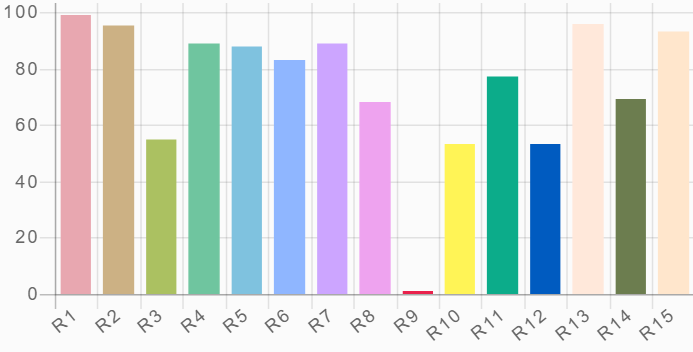 What is a good R9 value?

Although the maximum possible value of R9 is also 100, unlike average CRI numbers, R9 should be judged a bit differentlyMathematically, R9 is far more difficult to achieve a high score compared to the other R values that comprise the CRI calculations, and is far more sensitive to spectral variations. Therefore, an R9 score of 50 or above would be considered “good” while an R9 score of 90 or above would be considered “excellent”.You will therefore find that most lighting products available in the market will rarely specify the R9 value, and when they do, rarely will they guarantee anything higher than 50. Even at Waveform Lighting, we specify R9 > 80 or R9 > 90, and are unable to guarantee anything higher than R9 > 95 due to this sensitivity. This is due to the fact that CRI utilizes the CIE 1960 uv color space, which is skewed in a way that exaggerates color differences in the red region of the chromaticity diagram. Since CRI is a calculation that quantifies color differences between a light source and a reference source, a larger calculated color difference will result in a larger decrease in the R score.

Why is red such an important color?

Red is a crucial color for many applications including photography, textiles and reproduction of human skin tones.Many objects that do not appear red actually are a combination of colors, including red. Skin tones, for example, are very much influenced by the redness of the blood that flows right beneath our skin.

Therefore, a light that lacks red will make a person look pale, or even green. This can be problematic for medical applications where color appearance is critical for accurate diagnoses. In other applications such as photography, aesthetic appearance is crucial and many times cannot be corrected for even in post production and digital editing.

When searching for a high color quality LED, be sure to inquire about the CRI as well as its R9 value.

As you can tell, there are many considerations when choosing LEDs for your space. Sometimes it’s hard to extract all the necessary specifications, especially when ordering LEDs online or from low-value sources. Many low-cost manufactures tend to hide the important specifications such as the MacAdam Ellipse or R9 values. In addition, many lower-cost LEDs don’t dim sufficiently to achieve the required perceived results vs. the actual result. And finally, most LEDs lack the ability to adjust the temperature of the light (degrees Kelvin) and are locked to only one temperature setting, resulting in grayish looking light when dimmed.

Fortunately, there is a brand of LEDs that doesn’t require any dimmers (yes, you heard it right) – so compatibility is not an issue. Dims to 0.1%. Rated to one-step MacAdam. Has a CRI value greater than 90 and R9 value over 50, and adjustable temperature between 1400K and 10,000K while maintaining uniformity across all various form factors such as recessed lights, track lights, bulbs and linear (tape) lights. It also has over 16 million color combinations and can mimic natural daylight. Want to know more? Call us at 866.815.0099 or email info@theautom8group.com.